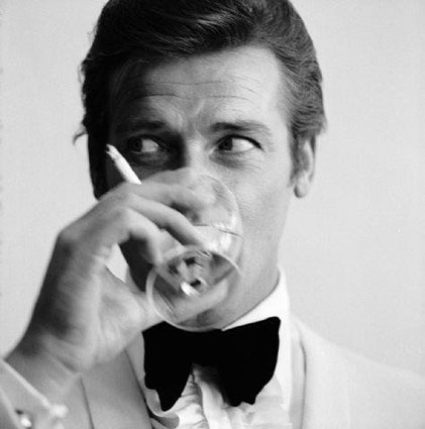 If you’ve come to learn the name Roger Moore at all it’s because you know him as Bond…James Bond. Of course there is a slight chance you knew him as the Saint ( 1962) as well. Most interestingly, Roger often found himself in films with titles that started with “The Man”. He’s been in The Man Who Haunted Himself, The Man with the Golden Gun, and The Man Who Wouldn’t Die. Roger, like most Brits of the dramatic bent, sought Hollywood for American film fame. Us American’s seemed to only give it to him on our terms. We liked him as The Saint, and The Persuaders! ( both T.V. series), and of course the Bond films- though he was always second to Connery.

We liked him with Liz, in The Last Time I Saw Paris. He even played Sherlock at one point! What’s even more interesting is he’s still acting! He’s done voices in some children’s films, had a role in Spice World, and acted in a few T.V. movies, including “The Saint” ( again) which came out this year. And while he was rather haunted by the fame of his 7 film run as James Bond, it treated him pretty well. With a lovely website ,fan following, and the title of SIR Roger Moore bestowed upon him in 2003, he is still able to humbly say he thinks that Daniel Craig is the best Bond ever. Happy Birthday Roger!

Check out his book  My Word is My Bond: A Memoir  for more Moore:)